Call to Afternoon Prayer, on the Square

In the middle of the day before yesterday on the Square(one block in all directions off the corners of Trade and Tryon) I was chatting with Swazey at the Coffee Mill when I looked out the window and saw one of the cabbies preparing to go to prayer in what I perceived full Islamic fashion. I remember seeing this in the real with my own eyes for my first time years ago while traveling in Morocco with the Marine Corps. Through the years I have witnessed Muslim believers being called to prayer at various location around the world several more times but I had never seen what was about to happen manifest here in Charlotte, let alone the Square. I grabbed my camera which had the big lens on and literally ran out the door excusing myself from the intellectual conversation that Swazey and I were having based on the fact that neither one of us had ever seen anyone praying to Allah Uptoon.

I positioned myself far enough away that I did not feel like I was intruding on this man's personal space and then I went to work making a document. 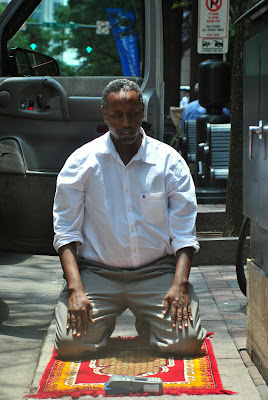 The first strange thing that I noticed was that this dedicated follower of Islam was facing North, not Mecca. Observe that his car is to his immediate right and it is pointing directly south on Tryon. Mecca is actually to the east and a bit south of here which means that his positioning is way off. 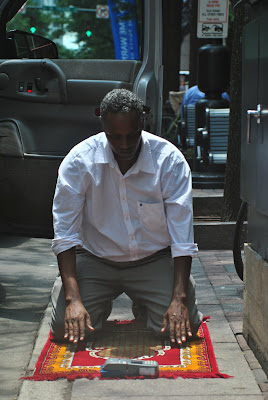 As an observer I then realized that there was a mechanical device at the head of his prayer carpet. 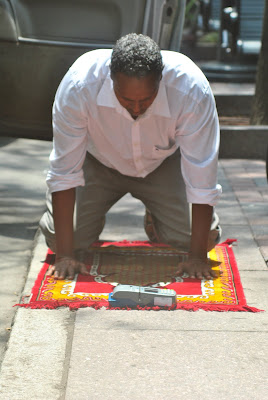 Upon closer inspection I discovered that the object appears to be a portable credit card machine. 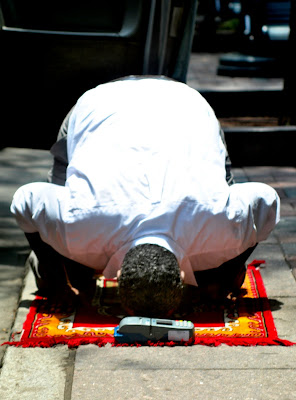 What a peculiar sight indeed. Many things about this Muslim prayer session did not seem real or better yet authentic to me as had the ones I have witnessed prior. 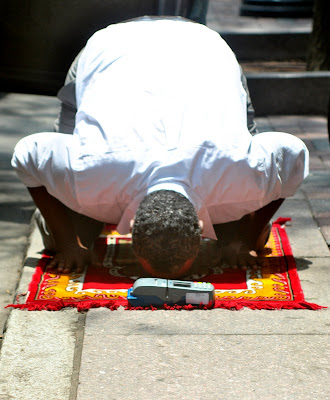 If any of your have any ideas that are not in anyway attached to hate or disrespect I would be willing to listen because I am truly not sure what I witnessed on the Square the day before yesterday.
Posted by Billy Fehr at 3:43 AM

is he a meter maid?

Maybe he is still new at it. Or maybe he is trying to pick up chicks. Actually he is facing North West. Because N.Tryon is NOT true North.

Actually Unibiker, I had already looked at the map when I did my initial research for this post and discovered that N. Tryon is to the north and east. The closer to the square, the more towards true north Tryon aims. Either way he was most definitely not looking towards the Arabian Penninsula...

rules were made to be broken

Maybe he was just worshipping the credit card device as a symbol of money/prosperity and wealth.

Jordy and K,
You two are brilliant...

I'd have thought Mecca would be north-east from Charlotte.

I can't run Google Earth on this computer; but if you have Google Earth, you could find out by using the "ruler" tool to measure the distance. It will show the the line, and you can see the direction from Charlotte.

By the way, there are GPS devices for Muslims to find the "qibla" (the line to Mecca.) Eg:

Peace be with you. Here, we go to the Quran, to clear up what you may consider "disobedience" or an act of impiety on the part of a Muslim. Before the verse, let's have some background investigation:

As for the explanation of this verse, Allah first commanded the believers to face Bayt Al-Maqdis, and then to face the Ka`bah during the prayer. This change was difficult for some of the People of the Book, and even for some Muslims. Then Allah sent revelation which clarified the wisdom behind this command, that is, obedience to Allah, adhering to His commands, facing wherever He commands facing, and implementing whatever He legislates, that is the objective. This is Birr, Taqwa and complete faith. Facing the east or the west does not necessitate righteousness or obedience, unless it is legislated by Allah. This is why Allah said:


"It is not righteousness that ye turn your faces Towards east or West; but it is righteousness- to believe in Allah and the Last Day, and the Angels, and the Book, and the Messengers; to spend of your substance, out of love for Him, for your kin, for orphans, for the needy, for the wayfarer, for those who ask, and for the ransom of slaves; to be steadfast in prayer, and practice regular charity; to fulfil the contracts which ye have made; and to be firm and patient, in pain (or suffering) and adversity, and throughout all periods of panic. Such are the people of truth, the Allah-fearing." (2:177)

Now, go back up and read the background I gave you, to refresh your memory of why this verse was revealed. Secondly, as far as the mechanical device, the Muslim, when paying in a public place has to place a "sutra", or an object in front of him, which will act as a means to separate the people from his prayer space, even if the sutra is a stick, pebble, handbag (in case of a muslima), etc. It is not the size of the barrier that counts, but the intention that counts. Any more questions, respond and I will check back for more updates.

Anon 10:48
Thank you for the clarification, I did not mean any disrespect to the act of praying to Allah. In fact I have much respect for those who practice what they believe as long as it is real.