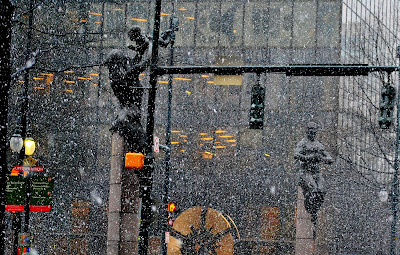 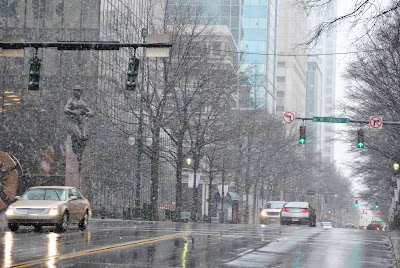 Even though the light is no longer immediately visible its power remains infinitely bright. A tall fellow wearing a dark and gray pin striped suit with a saffron hankie in the breast pocket walked by me on College and asked without stopping for the answer, "How's the synchro?" I thought to myself, crackier than ever, do you have a minute? Last week I told you about the combat related death of 25 year old U.S. Marine Noah M. Pier. This fellow human was killed in Helmand Province the week before, an unfortunate result of the Obama/American gamble of a surge in Afghanistan. I had mentioned in the bottom of that post to check out Cedar Posts' Blog to read more. Doug, a dedicated Traffic Stop reader and cyclist who rode with me once on a 220 mile ride(aka Ilan's best Idea ever) to the S.C. coast after reading my post did just that. While Doug was at Cedar Posts he noticed a link to the Carolina Raptor Center which enticed him into clicking. At the Raptor Center's site Doug read that they were taking suggestions to name the New Baby Eaglet that had recently been born to two bald eagles named Savannah(even more synchro) and Derek. At that point Doug saw it fitting that the eaglet be named after Noah M. Pier and he left a comment on my line letting us know.

Yesterday morning I had a minute to scan a few blogs of which one was Cedar Posts informing me that the vote was on after the over 800 suggestions were narrowed down to the top 5 for a public opinion vote. Twelve CP readers suggesting Noah had put his name on the top of the list of finalists. In theory this vote counts more than your Governmental Votes which will bring you nothing more than a Summons for Jury Duty. This E-Vote is way easier than the last one I asked you to cast. All you have to do is CLICK HERE and look at the 5 choices. Once you make your decision just type in the proper noun: Noah, then click submit response. The other night in front of his casket the spirit entity felt my presence which means it will see the flight of an eagle's wings. This has nothing to do with the emblem of a country, more than that it is the definition of emotional, spiritual, physical and inner body transfer. PLEASE ROCK THE VOTE, PASS ALONG TO YOUR 'FRIENDS' and let it be taken into the sky on the wings of a bird whose mortality is connected directly to the power of its intuition.
Correction: Nothing like seeing an embarrassing grammar usage mistake 24 hours after I posted it. Yesterday afternoon I caught my own incorrect application of than which should have been then: "Yeah, I know metamanicism is not a word but if it communicated any meaning your way then it has served its purpose." In the second sentence none the less. I do know the difference but apparently was not paying close attention.
Posted by Billy Fehr at 3:26 AM